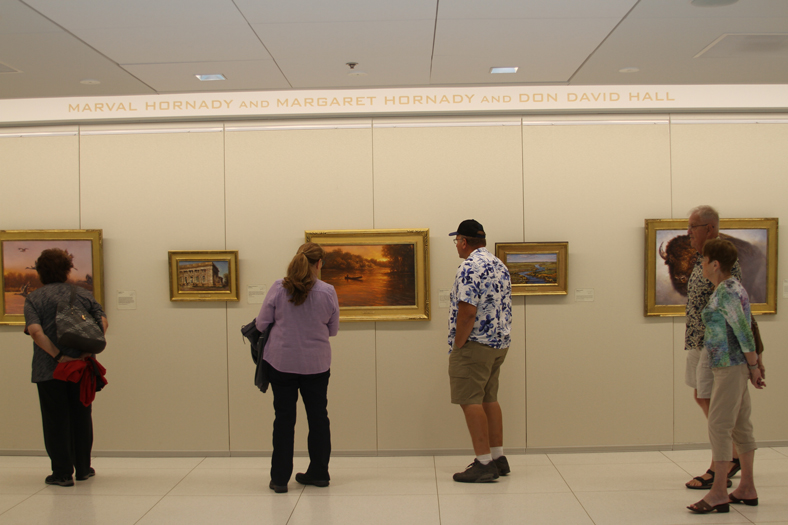 Stuhr Museum houses over 140,000 2D and 3D objects in our collection. With over 200 acres of property and over 100 structures on the museum grounds, Stuhr Museum exhibits numerous artifacts at any one time. Each of the objects on exhibit illustrate a unique component of the history of the Hall County and Central Nebraska region from the 1840s until 1930 and the individuals who called this region of the country their home. The famous Stuhr building, named for the founder of the museum Leo Stuhr, was created by renowned architect Edward Durell Stone. His son, Edward Durell Stone Jr., worked with his father to design the iconic landscape which surrounds the museum on all sides with water. The building is home to 15 permanent exhibits made up of historic Hall County artifacts, as well as 10 yearly rotating exhibits that highlight a variety of topics in either history or local artists and artwork.

Many other buildings on Stuhr Museum grounds exhibit artifacts from different aspects of Hall County life and history. The Gus Fonner Memorial Rotunda houses the immense historical artifact collection of former Stuhr Museum benefactor Gus Fonner. The architecture of this building offers a clue to the contents exhibited inside, as the Rotunda was designed in the shape of a spoked, pioneer wagon wheel. The Fonner collection consists of 19th and early 20th century artifacts from the Western United States and is truly a sight to behold. The collection is comprised of military and civilian weapons, Southwestern United States Native American clothing, pottery and artwork, and accessories from the American home at the turn of the 20th century.

The Antique Auto and Farm Machinery Collection located in its own building on the Stuhr Museum grounds is a salute to the importance that agriculture has played in the history of Nebraska. This collection of antique tractors, large farm equipment, and automobiles dates to the late 19th and early 20th centuries and is well known throughout the state and country as the home of several highly rare agricultural artifacts of this region and era. Each of the vehicles exhibited in this collection are in excellent condition and were driven into place in the building that they are currently displayed in.

The photography collection at Stuhr Museum is comprised of some 50,000 photographs of the Hall County and Central Nebraska region. Over 28,000 of these photos originate from the work of long time Grand Island Nebraska photographer Julius Leschinsky, as Stuhr Museum houses the original glass plate negatives from his career. There are also sizeable collections of photographs from Hall County photographers Michael Murphy, Henry Locke, and Jack Bailey. These photographs capture diverse scenes from everyday life in Nebraska during the late 19th and early 20th centuries. The photos document scenes from rural and urban settings; portrait photographs of men, women, and children from all walks of life; historic buildings and the businesses once housed within them; countless social and fraternal organizations; and all manner of heartfelt moments between friends and loved ones. The Stuhr Museum photography collection is a priceless treasure that all residents of central Nebraska are lucky to have available to them.